They are therefore a drain on the economy in terms of taking education facilities and the infrastructure etc., compared to their contribution to the economy.

Those over 25 and under 54 years of age in 2013 are the major contributors to the current economy. They represent 42% of the population.

Many of them will still be undertaking educational studies, and some may be in a re-development of their career, but the majority of them are into their career, are starting to get married and begin the process of starting families.  This creates a huge population for consumption of goods and services and a taxation base for our economy to look after the bottom 31.5% of almost dependent residents.

This means that 42% population that are forming households, engaging in career re-development all in have spent and living their lives looks after the rest of Australia. This percentage is liable to decrease in the future as we face a digital economy with the lower levels of permanent employment, and with a large amount of infrastructure, mining and major projects employing  fewer people per million dollars spent.

The 55 to 64 year old age group which accounts for 11.8% of the population, when combined with a 65 years and over population (14.7%), totals 26.5% of the population.  While they are good consumers and they provide wealth to the next generation, in some cases they are major takers in terms of health care of age retirement and other expenses, and they are liable to live a lot longer than forefathers with the age being around the mid-80s before death.

With this long life expectancy, they will be drawing at a faster rate by those in the 25 to 54 year age group and may eventually, in the next 5 to 6 years, reach 30% of our population. 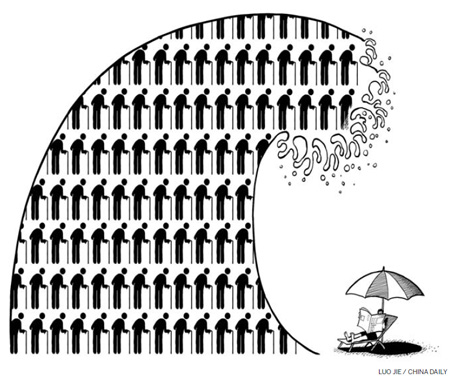 Is it any wonder that the tax dollars to the government to support our economy are decreasing and the government is looking for a higher retirement age to keep people in the workforce rather than make them dependent on the future generations’ earning capacity?

At the micro economy level small to medium businesses are noticing the changes as many of their customers are part of this group that are ageing and even consuming less.

I have recently worked for a second level player in the grocery trade at a national level in Australia.  They are facing an ageing population within their loyal customer base, and even within their customer base that shops around.  The result is that there are less purchases per shopping visit and less purchases per multiple shopping visits per week.

This is also reflected in department stores, which is why Myer and David Jones need to amalgamate.  They can talk about design labels and the top end of the merchandise, but it is the bottom end of the store that creates daily cash flow and gives the daily intake that is at risk as customers desert the stores and go to Kmart and Target style stores where they can buy sporting goods, clothing etc. suited to their more “retired lifestyle” and “essential” compared to the days when they were in the executive or office mode.

Our economists talk about China and their ageing population and potential slowdown and challenges to their economy.  However, at home, we seem unable to look in the mirror and see that this is happening to us at an even faster and greater rate.

With the huge infrastructure and large distance demands on Australia, together with most of our people living on the coast (urban population is 89%), and a greater “dependent” population bundled with “casual labour” market growth, adult obesity (28%), maturing workforce, the changing digital economy and poor productivity factors, the outlook is bleak long term.

The economy reflects the sum of all businesses and productivity outputs by enterprise and government Australia-wide.  If this is impacted on by ageing population and its two main characteristics of increased welfare and decreased consumption, thenthe economy and GDP is affected.  All businesses and enterprises at the lower, small or medium level are also greatly affected by the same factors and trends, and get less profit and pay less tax.

While government has been criticised business for not looking at the demographics and profile about ageing population and its impacts on every aspect of our life, economy, the labour market, enterprise etc. for the last 10 years.  It is, itself, guilty of the same neglect and understanding of the trends that are now largely responsible for the current malaise in business.

Most businesses do not look at their customer base, databases and transactions per customer etc., and plan for what is inevitable in the Australian market. They do not review changing operational size and scale, reinvent markets, products and services, or engage in strategic planning for this new future market mosaic.

Generally they do not value market reviews and business planning on a yearly or four yearly basis. They consider that it is “business as usual” and have not registered that the consumer profiles and sentiments are changing.

The facts above demonstrate that it will not be “business as usual”, and it will not be a smooth running economy as we enjoyed for the last 20 years because we are about to enter a huge state of dependency and change.  Even our trading partners, despite China’s great input into our economy, are going to be more global and less Asian/local, and they, too, are impacted by ageing populations that impact on their customer base and bottom line.

It is going to be essential to take a long hard look at the future customers that you have in your business, and understand their ageing and consumer product life cycle as they consume less in old age, and estimate the impact of this on their value to your business and its maintenance or growth of profit.

The greatest asset in the business is the customer, and the same trends that have impacted on the USA and reduced its wealth as ageing customers move into different sectors and vacated others to buy their goods or fulfill their wishes, will now occur in Australia.

You should be informed and should be making the appropriate decisions NOW.